Revealed for the first time live in Madrid at the International TrendVision Award 2012, the new Wella Professionals Haute Couture trends for 2013 developed by Josh Wood and Eugene Souleiman bring to life this year’s theme: THE SOUND OF COLOR. Wella launches their hair fashion collections annually, and 2013’s fall/winter collection doesn’t disappoint. These looks continue to be inspirational to hair stylists and colorists alike, with the inevitable development of the International TrendVision Awards being the result. A global hairdressing competition created to encourage vision and new style, this prestigious awards show unites people who are passionate about the art of hair and looking to innovate and inspire. 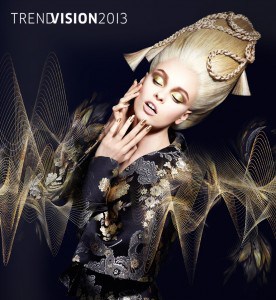 The Sound of Color Collection showcases 4 looks that play on the different emotions that music styles can trigger in our minds. We all see, hear and connect…it’s something that each and every person, hairdresser or not, does and understands intuitively. These looks bring together the richness of the visual and musical worlds, igniting a new energy, and recharging excitement to inspire the artist in every stylist and colorist out there. Fusion, Decibel, Echo, and Allegra were the artistic interpretations of these emotions thought up by Global Creative Color Director, Josh Wood, and Global Creative Design Director, Eugene Souleiman.

Fusion is represented with an east meets west vibe, a modern day geisha. “It’s almost Avatar and very technical” says Souleiman. Decibel brings an homage to the early 70’s, between glam rock and punk. “There is total freedom in color, it’s very bright and brash” says Wood. Souleiman describes Echo as “A tormented soul…full of conflict. It’s a reaction to the economic crisis.” And Allegra is described as”…A piece of art.” The looks are elitist and filled with ostentatious color. “This client is never satisfied.” says Wood.