The History Of Coloring Hair

Hair color is a huge industry globally, with people changing the color of their hair for many cosmetic reasons. Whether it’s to cover grey, change for fashion, or restore the hair to its original color after oxidation or sun bleaching, it is estimated that 75% of the population have colored their hair at some point. Hair coloring is an ancient art and traditionally was applied as one solid color, but modern trends have pushed towards more multidimensional looks with variations of colors. Hair color itself has changed drastically through the ages, starting with plants and developing into the plentiful supply of permanent, demi permanent, semi permanent, and temporary varieties that are at artists’ disposal today. The practice of coloring the hair has taken many twists and turns, with the fads changing along with the times.

In ancient times dyes were typically obtained from plants such as henna, indigo, cassia obovata, senna, turmeric, black walnut hulls, red ochre, and leeks. Archaeologists have discovered evidence that early man used minerals, plants and even insects to appeal or repel mates. There is even recorded evidence that Egyptians have used henna as a coloring agent as early as 1500 bc.

Hairstyling was introduced to Roman society around 300 bc, with noble women dying their hair red after seeing it on Gaul traders, whom also dyed their hair red as a symbol of status and rank. Middle class Romans typically dyed their hair blonde and the lower and poor class dyed their hair black. For a period of time, Roman prostitutes were required by law to dye their hair blonde, but the color became so popular, that many followed suit causing to eventually be the most sought after color. Emperor Comodus (161-192) was famous for powdering his white hair with gold dust, a practice that cought on amongst the wealthy. 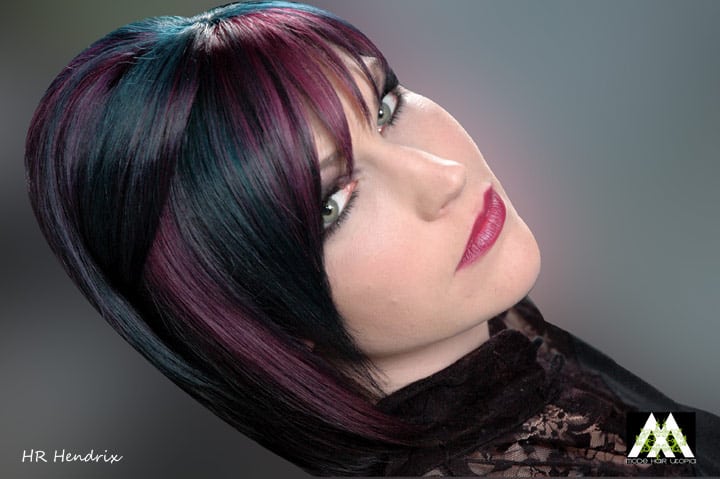 In the dark ages, red hair was seen as a sign of witch craft, with red hair being caused by a genetic mutation. The first documented case of natural born red hair appeared in Scotland around this time, prompting many to dye their hair to hide their “affliction”. During the Renaissance, women favored golden and blond hair for its angelic connotation, and they used alum, honey, and black sulfur to encourage sun bleaching for a flaxen look. Queen Elizabeth eventually changed the impression of red hair, with her auburn hair being copied as a reflection of royal status.

In 18th century Europe, people began coloring their hair for the purpose of covering grey, and someone discovered that lead did the job. This lead people to begin using metallic dyes, with dire consequences. People began dropping dead from using this method. In Europe at this time, there was no extra space in cemeteries, so old caskets were exhumed, opened and scratch marks were discovered on the inside. People began realizing that their loved ones weren’t in fact dead, but in comas from the lead based color, and had been buried alive. This prompted the “wake”, with anyone who had colored their hair with lead being laid out for a week of observance to see if they awoke. When they were finally buried, a rope was placed in the casket with a bell 6 feet overhead so that the grounds keepers could find them. Hence the terms, “saved by the bell” and the “graveyard shift” were born.

In the early 1800’s some men began using silver nitrate to darken the grey in their mustache, which lead to the development of proper dye. Silver nitrate, gum water, and distiller water were mixed and referred to as Grecian water, however repeated use of this mixture caused the hair to darken and turn purple. In 1859 a German student was experimenting with coal tar and after diluting, realized he had also made purple dye leading to the creation of synthetic dye for fabrics and hair.

In 1907, French chemist Eugene Schueller developed hair dye based on synthetic paraphenylanadiamine, which he called Aureole. This name was later changed to the well known L’Oreal. A few decades later, New York chemist Lawrence Geld developed hair color that penetrated the hair shaft and started Clairol. In 1950 he revolutionized the hair color industry by introducing the first single step color, Miss Clairol Color Bath. This product would lighten and tint in one step with out the use of harsher bleaches. Unfortunately at this point, hair color had a social stigma. Around the 1920’s during the flapper era, young women were changing the color of their hair for fashion and style, followed by a backlash that this was something only “loose” women did. Although these views relaxed around 1930, by the 1950’s and the birth if the color bath, women still didn’t want to admit to changing their hair color. It didn’t become mainstream until advertising copywriter Shirley Polykoff introduced Clairol’s famous campaign, “Does she, or Deosn’t she? Only her hair dresser knows for sure!” They promised natural, salon worthy results in the privacy of the home, causing sales to go for $25 million to $200 million when the ad was released in 1962, and during the next 20 years, the number of people coloring their hair rose from 7% to 40%. Flash forward to the 1970’s when ad executive Ilon Specht coined L’Oreal’s “Because I’m worth it!”, recognizing women’s desire to be acknowledged. Equal rights was a hot button during this time, and this tag line boldly declared that every woman has the right to be whom she wants and L’Oreal will help them achieve it.

Throughout the years, ample attention has been given to blondes and red heads, leaving most to speculate that these are the more historically favored hues. From Queen Elizabeth and her auburn tresses signifying beauty and wealth, to Marilyn Monroe and the Hollywood blond bombshells defining “sexy” for an entire era of men and women (and giving hair bleach its place in history), people have been altering their hair color for centuries. With henna saving some Scottish women from persecution, and even metallic dyes causing harm to a generation, we can all breathe a sigh of relief that we are blessed with products that are safe for our health and give us beautifully consistent results. From permanent hair colors for gray coverage and lift to demi permanant hair colors for depth, richness, and shine without the commitment, we offer both the Wella and Schwarzkopf hair color lines to bring your hue dreams to life here at Kosmos Hair salon in Jupiter. And while we can look forward to new hair trends and new hair products, it’s still nice to know how far we have come in this popular art form.