David Beckham, the Über trendy British soccer player is the first male cover model in 26 years to adorn the cover of Elle Magazine. Just shows how the growth in male grooming and styling has advanced into 2012. We at Kosmos have seen an increase in male clients over the last two years to what was predominantly a female salon. 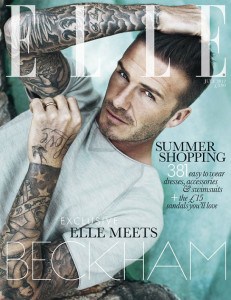 We also noticed that the men were having their hair styled more regularly. After looking through our bookings for 2009 and comparing them to 2012 we found that the guys back then were only coming to the salon once every 6 weeks the average now is 3 weeks. So either we have more attractive stylists here now or the guys are  taking better care of themselves!

The male hair products have also seen an increase in sales over the last 4 years, in an economy we are told is not doing too well. Gillette have seen a small but significant increase in male grooming products as well as a revitalizing of older brand aftershaves such as Old Spice. Not too sure myself about that one but it is great that the guys are taking a bit more care of themselves.

Cosmopolitan Magazine recently posted an article regarding the male’s nether regions and to trim or not to trim and stated “Guys who don’t trim their pubic hair fall into two camps. The first is the alpha male who thinks maintenance beyond shaving his face is gay,” says clinical psychologist Belisa Vranich, PsyD. He’s traditional and chivalrous, so don’t expect much experimentation in the bedroom. “The other type of guy is sweet but lazy,” says Vranich. “He’s open to trying naughty moves if you take the lead…and as long as he doesn’t have to do too much work.””

The jury is still out here but the majority seem to think “tidy” is the best look. But guys don’t come rushing in here for a trim down under because we will just send you to Australia ;0)