A major part of any hairdressers tool kit is the many varieties of brushes that we use. Team Kosmos have been using Bio-Ionic brushes for some time now and wholeheartedly recommend them. They help to control frizzes and the buildup of static in your hair as you brush it and they help to reduce tearing and split ends. 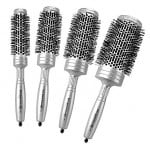 The negative ion attempts to neutralize itself by getting rid of an atom, and in the meantime it reacts with surrounding materials . The negative ions emitted by an ionic hair brush reacts directly with your hair.

What Ionic hair brushes do is attempt to fill in that gap by bringing negatively charged ions to the hair in order to make the hair appear shiny and healthy. The ions aim to close off the hair cuticles and lock in moisture to the hair strands.

Hair has a natural positive charge that repels hair strands from each other, this causes the frizzy or fly-away hair. By using an ionic brush the negative ions react with repelling hair, the ions force the strands to lay straight alongside each other. Using an ionic hair brush characteristically gives hair strands a shiny and healthy appearance. When the hair cuticle is flattened, hair typically is softer and has more volume.

Bio-Ionic  hair brushes can be used in conjunction with an ionic blow dryer, we use the Turbo Power 323 working together they maximize the appearance of healthy hair. As in ionic hair brushes, ionic blow dryers also emit negatively charged ions. These ions break down the positively charged water molecules in wet hair. Once the water molecules are smaller, the hot air from the blow dryer can more easily penetrate hair strands. Hair is then able to be dried quicker, thereby cutting down on drying time and helps to prevent heat damage. As well as looking after your hair recent research has shown that negative ions can help reduce your blood pressure, improve metabolism and aid the functionality of the central nervous system. Negative ions have also been used extremely successfully in the treatment of allergies, hay fever, and respiratory conditions. Where as  Positive ions which have lost an electron are considered to be unhealthy. These are found in dust, smoke and some toxic substances.

Ionic products, hair driers, brushes and flattening irons are widely used in all aspects of hair care. Kosmos Hair Salon has seen that continuous use of ionic products leaves the hair feeling renewed, looking repaired and revitalized and feeling softer, smoother with a shinier finish. Ask your stylist about them today.